TOAD Hall is the new home of Warrnambool Symphony Orchestra and other local community performing arts groups, but like lots of ex-church halls the acoustic properties leave a lot to be desired. We are in the process of applying for grants to install acoustic treatments but before we install anything it is good to have a baseline to see where the issues are and a measure a what we want to achieve.

The Jubilee Hall (Hall 1) is permanently set up for the orchestra with stands and chairs. It is sometimes used by smaller ensembles and will continue to be primarily a rehearsal space. Currently I find it a little muddy which is probably due to late reflections from the 5.75m high ceiling but could also do with a little less reverb so there is better separation of instruments for rehearsing.

The Middle Hall (Hall 2) is mainly used by theatre groups. It is entirely hard surfaces and has massive reverberation issues. The wooden floor is also very loud (especially with 80 kids running around). A large set of sliding doors open it up to the West Hall.

The East Hall (Hall 3) has a stage at the opposite end to the sliding doors and is used for meetings, production tasks and sometimes as a pit area for musical theatre rehearsals. Given the stage and dimensions of this room I can see it being used as a performance space for small to medium ensembles. The current acoustics are not too bad but could probably be improved with some extra absorption and and diffusion panels.

All halls have 5.75m semi-vaulted ceiling which are flat and reflective which is probably causing problems. Jubilee hall has 4 beams which could be suitable for hanging panels but the other halls do not.

Measurements were made with a Beringer ECM8000, a Yamaha DBR-10 speaker and RoomEQWizard. 512k sweep (256k for hall 1) from 0 to 3000Hz - I will go up to 10000Hz to catch some of the harmonics next time. I didn't have access to a pro SPM so the calibration is probably a little off but it gives us an idea of what is happening in each space. The DBR-10s have a response of 55-20000Hz so ignore anything under 50Hz. 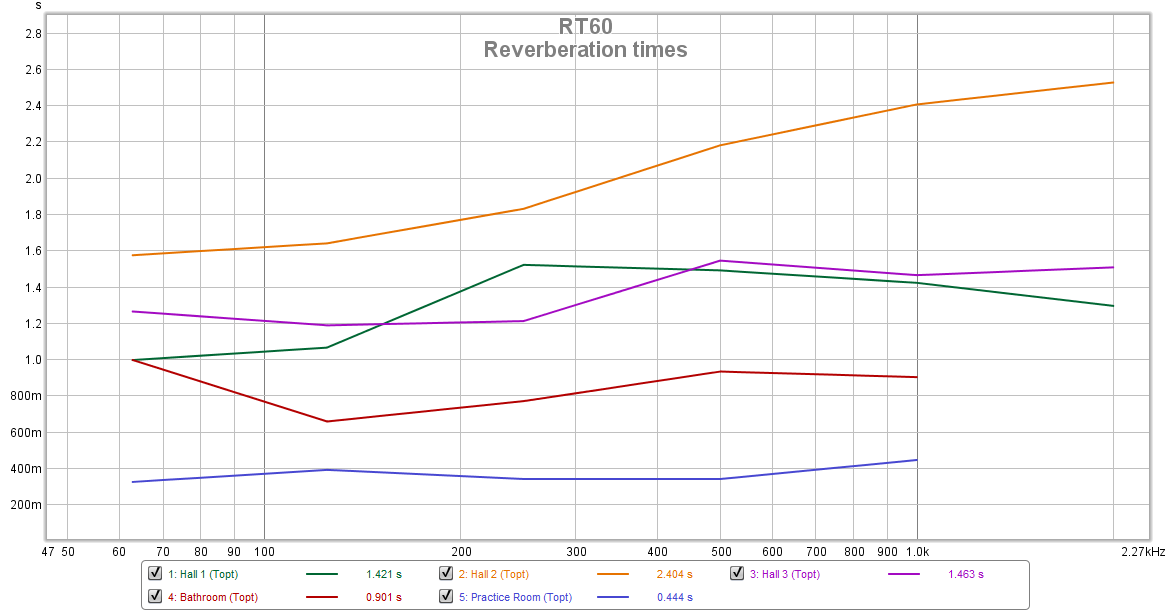 These targets are based on the intended uses for the spaces as described above and using the suggested times - see below.

Using the conductor position in Jubilee Hall, the speaker was positioned at several instrument positions. 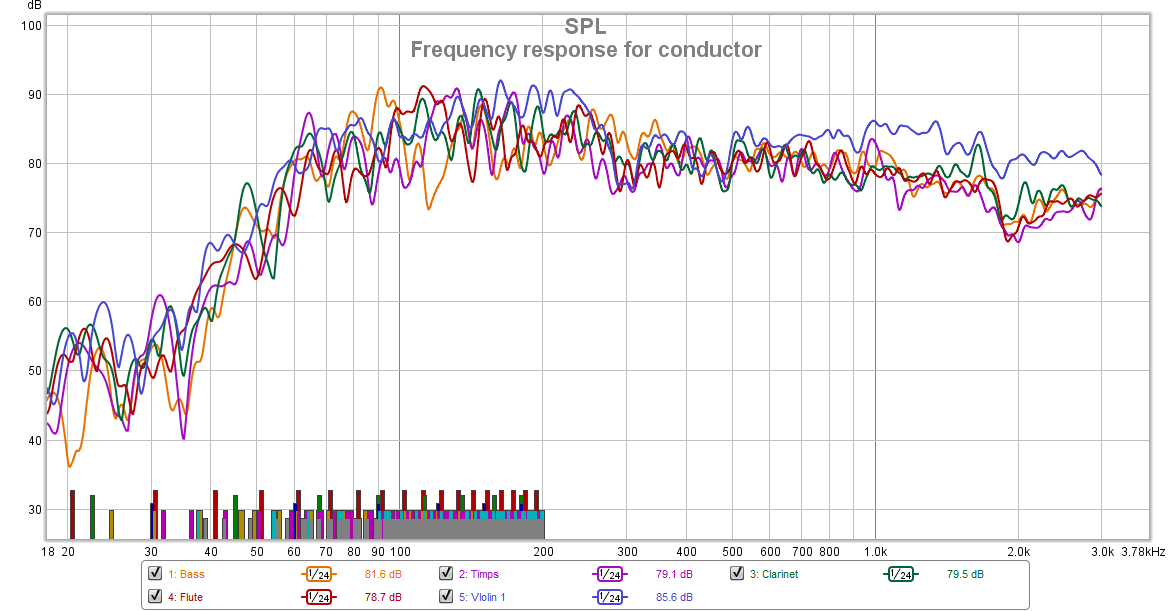 Response is not too bad - mostly flat (10dB) throught most instruments range. Will definately be improved if we bring the reverberation under control.

There is some some modal interferance at the bass end as would be expected but big corner traps are probably out of our budget given the size of the building. Heavy blacks could be a better solution to this.

Interestingly the violin poition response increases as it gets into the violin upper register while the other instruments are falling away.

There is a big dip in all instruments at around 1800Hz (A6) which is strange.

Using a static speaker positioned where the double basses stand, the mic was moved to various other instrument positions. Nothing too interesting here though you can see the bass corner effect in blue. 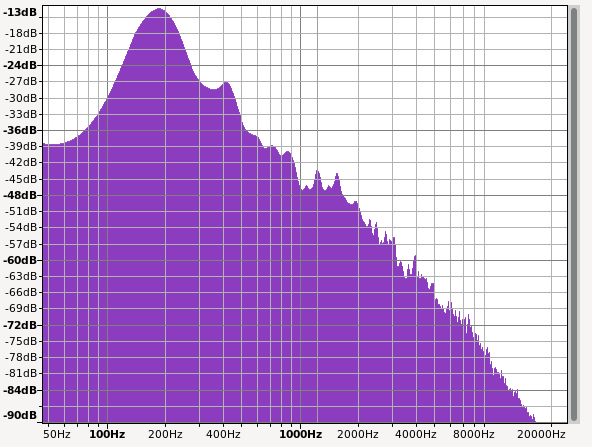 All halls, but particularly the middle hall the foot noise is significant. Recorded stamping to locate peak.

Need to make sure there is good low frequence absorption (bass traps) in the hall to deal with that 180Hz peak.

And finally here is the pretty waterfall data for Jubilee Hall

Here are the useful papers I came across while researching this.

Focused on small practice rooms but includes some tables for suggested reverberation times:

Jubilee hall has an area of 127m^2 and a volume of 723m^3 and with the current carpet and curtains has a reverberation time of around 1.4 seconds which is at the upper level for a recital room and it would be good if we could reduce this towards 1s.

I'm planing to build some of these for my teaching room but it might be worth testing their use in the Jubilee Hall to keep it lively once we have dealt with the reverberation issues.

The Jubilee Hall is going to be the first to be tackled as the orchestra is the primary user. Major works will be undertaken in the next few years so permanent fixing to surfaces should be avoided. Assuming we are successfull in our grant application for the Calando panels, I suggest we use them in the following way.

From the spec sheet, the Calando panels are 25mm deep and should provide effective absorption from 500Hz up. We can capture some lower frequencies by creating an air gap at the back (~65mm) by framing them with 90x35 timber.

Mounting french cleats at a suitable height between the windows will allow easy hanging of panels and removal for renovations. It will also allow experimentation with absorption and drapes to find the right sound for the space. There are 6 primary surfaces between the windows. Suggest we start with 6 absorption panels and experiment with position.

Create some lightweight frames that can hang from the beams at around 4.3m (75% height). Will cut down on primary floor/ceiling reflections. Would probaly need 6 panels to make a difference. Calando panels are 6kg so should be able to keep panels around 10kg

Step 3 The proportions of the room are probably creating some modal issues - long and thin with a high ceiling. Using the Sabine ratio of 2:3:5 and based on the room width of 7.6m, the ideal dimentions would be 5m ceiling and 12.6m length. A full height curtain track black drape on the far beam would reduce the room length to 13.6m and also provide additional absorption. o